The Importance of Home Cooking Today 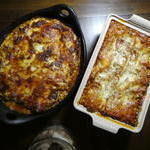 By FoodMan,
January 25, 2006 in An eG Spotlight Conversation with Sara Moulton